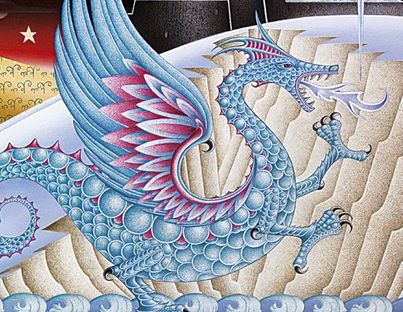 The Darkest Road is the final volume in The Fionavar Tapestry by Guy Gavriel Kay. This beautifully crafted trilogy began with The Summer Tree and continued with The Wandering Fire, following five University students from Toronto as they cross into Fionavar, another world, where fate awaits them. The Darkest Road is the epic battle between Rakoth and the armies of the Light. The characters of Jennifer, Arthur and Lancelot is tightly bound by their past and future selves. Encompassing all fate is Darien, a lonely child who must choose between Light and Dark and in that act, can either save or doom all worlds. In the midst of battle, the Seer Kimberely is left without the power she used to summon armies to war against the Dark, now struggles with the casualties resulting from her action. In the final and darkest moments of battle, Paul, Lord of the Summer Tree, finally discovers what gift, or curse, the title of Twiceborn granted him.
The Darkest Road forms the final piece in The Fionavar Tapestry where Guy Gavriel Kay crafts a conclusion that is beautifully written and emotionally powerful, a satisfying conclusion that maintains the integrity of the trilogy.